Farm Walk with Soil Farmer of the Year Richard Suddes

Richard Suddes farms at 850 – 1000 feet up in Durham. A mixed farm that includes an arable enterprise and a pedigree Limousin beef herd, he farms 800 acres that is owned, and another 400 acres on a share farming agreement. There are two predominant soil types on his farm, the top land which is fairly free draining with a sandstone bedrock, and the bottom land, characterised as glacial till, which is very heavy and challenging to work.

Richard started changing his management 9 years ago when he moved to a strip till system using a Claydon drill. He explains what prompted the change in management,

“We were fighting a losing battle doing what we were doing, especially considering the late harvests and the encroaching weather.

The decision wasn’t purely financial, I came to the realisation that there was a need to look after the soil.”

“It’s been a steep learning curve, initially we thought we could just sell the plough and buy the drill, but we soon realised it was more complicated than that.

The system isn’t easy, it requires a change of mindset; you farm for your soil.

Its all about flexibility, don’t force yourself to do something you’ll later regret, be patient.”

Richard is a member of the BASE UK group and has been to France to visit Frederic Thomas in France and came back inspired that it works.  He is also a member of the ASDA soils group that went on a trip to the US to see the no-till work going on over there.

However 9 years on, and having switched his Claydon for a zero till system, Richard is seeing results. “Through lots of learning and improvements, the soils and crops are getting better.” he explains, “We are working on optimising the soil chemistry and adding micronutrients through using gypsum, which has been a fantastic product for us to build soil.” As well as the soil benefits, there have been economic savings and time savings which have paid dividends, the time freed up from not ploughing has allowed the business to take on extra land on a share farming agreement.

“The time that we spent on ploughing we now dedicate to attention to detail and honing the system. 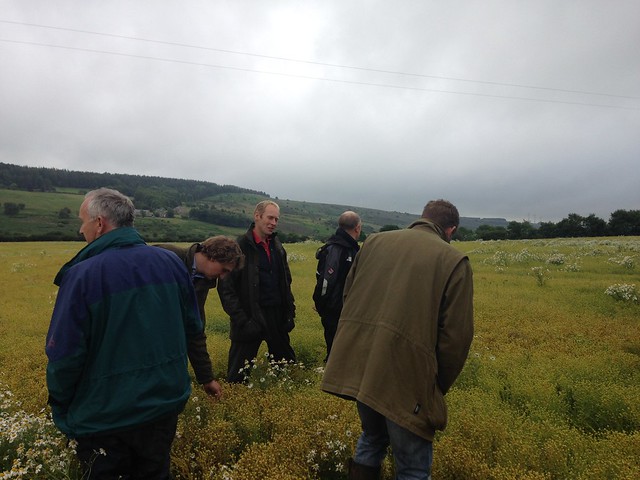 The system change gives you the time to do it as opposed to being stuck on a tractor all the time or doing what you have always done.”

It was Richard’s positive attitude and attention to detail within his management system that the judges in this year’s Soil Farmer of the Year competition were particularly impressed with, and was one of the reasons why Richard was a joint winner this year. On a drizzly evening in early July, a great group of farmers came along to understand how Richard was making this system work on these often unforgiving soils and hear more about how the system has been adapted to work for him.

We had the opportunity to see fields of winter linseed, peas, and wheat and understand how the soil is held at the centre of management decisions. Lots of discussions ensued around pest control (especially slugs!), rotation, nutrient management, varieties, and biology. The main discussions are summarised below.

Richard’s rotation is fairly flexible, but the broad premise is wheat / break (often beans or peas) / wheat / break (often oilseed rape or linseed).  Traditionally rotations was a bit of a problem, Richard has tried barley / rape / wheat, but the barley didn’t like being direct drilled on this farm and as such it was dropped. The main weed problem on this farm is brome, and this is one of the main reasons why stale seedbeds aren’t used, the next crop is drilled straight away.

Timing is critical with inclement weather conditions here, and crop failures in the past have often been attributed to putting crops in late.  By the second week in September all the crops are in. The biggest thing that they have learnt is establishment, “if you can get them out of the ground you are halfway there, so it needs to be early, early, early.

The combine comes out of the field, we pick an early variety and drill it, get something in.”

Slugs are only treated on oilseed rape and are treated reluctantly. Richard doesn’t have any slug problems with the wheats, he drills early and looks at variety choice. As it’s a mixed enterprise, the straw is taken off to use for the cattle, and as such, one possibility is that by removing the straw there isn’t the right environment that the slugs need to thrive.

On soils and nutrients

As mentioned earlier the farm is divided into two main soil types, the lighter sandstone at the top of the farm and the heavy glacial till land at the bottom. This soil inherently has a high magnesium content which makes the soil sticky. Richard is trying to improve the bottom land, and as such the straw is taken off the more forgiving top land and then returned (as manure) on the bottom land.

Richard has had the Haney soil test done on his soils previously which assessed the nutrient balances within the soil and looks at microbial activity. Now, every field is tested ever year, (not for biology, but for nutrients). The soils are tested for organic matter, with the top land averaging between 5-6% organic matter and the heavier land 3-4%. All arable fields were limed last year with Calcifert. As well as soil tests, he takes time to look at the field visually, what is being aimed for is consistency, uniformity and level crops.

As well as using the manure from the cattle, Richard has been using gypsum to help improve the soil. He explains, “muck and chopping straw was working but the soil was still sticky and capping. The gypsum is sorting this out.

The gypsum is the most important thing in changing our soil.”

The long term aim is to use the manure and gypsum to get to the point where he can reduce or stop applying fertiliser. As well as the use of nutrients, Richard has been looking at growing heritage varieties of wheat that don’t need as much nitrogen and is trying to understand whether they are able to associate with the mycorrhizae and use the soil biology to cycle nutrients within the soil and make them available to the plant.

Richard is using home saved seed to grow wheat and is seeing positive results. The home saved seed seems to work well with their system and is already ‘adapted’ to their conditions. The money that he is saving on seed, is being spent on applying lime and gypsum.

One of the other benefits that he is seeing with the gypsum is increased pest control. As the gypsum works as a drying agent, it works well for slug control and helps with leather jackets (as the crane flies don’t want to lie on it to lay their eggs).

Richard has increased his seed rates to maximise yields. In the wheat the colder temperatures mean that the plants don’t tiller as much so the wheat is drilled at 180kg/ha (OSR 180 -220kg/ha). This is part of the risk minimisation strategy but also allows for more roots in the ground which drives the biology of the system.

Cover crops are grown on the farm prior to spring crops or on any failed crops in the spring.  Last year Richard planted sunflowers and oil radish, and the sunflowers were the best cover crop on the farm.

Richard is now looking to under sow all crops with clover, and this year has under sown a field of peas with a strip of subterranean clover to see what happens.  Subterranean clover was chosen as its more frost tolerant, and the plan is now to under sow the wheat crops as the clover will fix nitrogen, suppress the weeds and be good for mycorrhizal associations. Richard explains, “Nothing ventured, nothing gained, we will try it and see what happens.

The issue with soil health is understanding and implementation. You need to understand the principles of how it works and then be able to apply them to your farm.”

A very enjoyable time was had by all.  Sincere thanks to Richard and Karl for a fascinating evening.