Farm walk with Soil Farmer of the Year Tim Parton

Tim Parton farms 300 hectares near Wolverhampton, which is split between arable crops and 100 acres of grass grown for haylage.  The soils are mainly sandy loams and clay loams and soil health is at the centre of his business.

Tim was the joint winner of the Soil Farmer of the Year competition for 2017, and at the beginning of July kindly hosted a farm walk so that other farmers could learn more about how he is farming using direct drilling and building soil biology and resilience at the same time.

Tim’s soil type means that his main issue is conserving moisture. Traditionally the soils were drying out and he wanted to put carbon back in the soil to improve it. Tim started with a Claydon drill in 2010 and then switched to the John Deere 750a (with his second harvest this year) as the Claydon was moving too much soil.  Tim credits the years with the Claydon as being important and teaching him a lot about soil and how to manage it.

Tim started using min till when he was growing sugar beet and wanted to get back on the field more quickly. He developed a complete fascination with the soil and quickly realised how important is was and how we cannot live without it. He explains “Soil degradation has happened over such a long period that we haven’t noticed, but it is so important and once its gone, there is no going back. Yields have plateaud, and it doesn’t matter how much fertiliser we put on, its not going to have an impact as the soil isn’t alive or in a position to respond.”

Tim is seeing results from changing his management and the crops were looking absolutely fantastic. During the walk farmers were able to see lupins, barley, oilseed rape and wheat and despite the lack of moisture, they were looking great. Tim credits this to the soil,

“The soils are improving so much, the soil is so much more forgiving and is working and alive.

The roots are invaluable, they will do it all for you. If you work with nature life is so much easier, I love showing people around my farm as I’m proud of what I do and the health of my farm. The soils are starting to get spongy, you can feel it when you go on the field, my feet tell me how healthy it is. Wildlife numbers are booming, and I am applying a lot less slug pellets and finding beetles.” 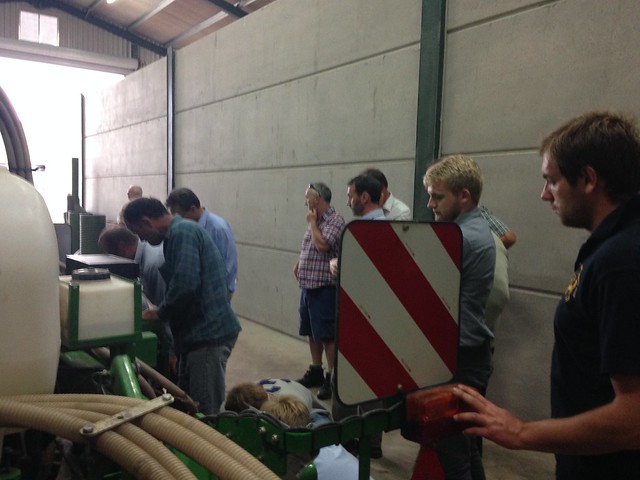 Tim’s rotation isn’t set, he grows what the field needs, but the basis is wheat/ barley / oilseed rape / wheat / barley / beans or lupins. He doesn’t drill any second wheats, and has found that using a direct drilling system a decent rotation is important, but there is also a need for flexibility and patience. He explains,

“the day you drill is very important, and establishment is key, if you are not patient then this system isn’t for you.”

The lupins are grown for seed and were drilled on the 9th April. Tim likes lupins as they have so many benefits to the soil.  “They have done all my cultivation for me, I just have to sit and watch it.” Prior to the lupins Tim had a cover crop in, which he values both in terms of the agronomic and financial benefits that they bring. Tim is in a mid-tier environmental scheme and as such is able to access support for planting the cover crops.  His favourite mix is tillage radish, linseed, vetch and phacelia. The use of the cover crops, building biology, and no cultivation has allowed for the biology to play a major role in crop and soil health and has reduced any issues that might have previously been there with compaction.

“What you need is roots, worms and biology. If you have these things then the soil works for you, and compaction isn’t so much of a problem, its about working with nature and the soil will carry you better.”

After looking at the lupins, the group moved onto see Tim’s barley which is Propino and goes to Coors for malting. In this dry year, he is seeing the results of his system, the crop was standing up well where historically it would have dried up. The crop was direct drilled after a cover crop of beans and vetch on the 5th April, and has had a herbicide applied for weed control.

While in the barley field questions were posed about whether Tim would ever consider using a controlled traffic farming system, but Tim is convinced that “you don’t need if if you get your soil in order.” Other questions included the topical issue of how the system would work if glyphosate was banned. Tim is optimistic that it could be done, and thinks that there is a lot of potential with companion cropping.

Tim is trialling companion cropping in his oilseed rape where he is growing burseem clover to fix nitrogen, encourage mycorrhizal association and provide soil cover.

His aspiration is to grow an 8-10 t crop of wheat with no inputs and is confident that he will achieve it as his biological activity is growing and helping his soils to work to their full potential. He is reducing his nitrogen applications whilst achieving yield improvements and is working to breed his own biology to help the populations in the soil. He uses a lot of seaweed and biotea which helps with photosynthesis. Tim is also testing soils as well as leaf and tissue to see how the biology is working at cycling nutrients as well as looking at biology under the microscope.

Tim is excited about the future on the farm and the possibilities where soil management plays a starring role. He explains,

“The future is bright and I’m excited about what’s to come, but there is so much more to learn.”

Sincere thanks to Tim for a fantastic and informative farm walk.