Simon Cowell, this year’s Soil Farmer of the Year winner, farms 400 acres of heavy clay with a large acreage below sea level. Simon has been working on improving his soils for the last 20 years, and moved to a no-till system 12 years ago, being flexible with both management and rotations to prioritise soil health.

Originally starting as a small dairy farm, Simon converted his farm to arable cropping. For the first few years they benefitted from the grassland legacy within the soil, however things then started deteriorating.  Simon has moved from running a traditional, wheat, wheat, rape rotation to now including a mix of spring  and winter crops including winter wheat, winter oats, winter beans, naked barley, spring beans, spring oats, linseed, spring peas, Lucerne, and ryegrass.  There is no set rotation, cropping is worked out on an individual field basis and decided by looking at what is the best crop for this field at this time in these conditions.

Simon was chosen as the winner this year because of his passion and enthusiasm for soil management and this was evident during his farm walk.

“Farming is such a long term thing, longer than any one person’s life.”

Simon focusses on building soil health with a combination of no-till, the use of homemade compost and a diverse rotation which grows healthy plants, allowing for a reduction in inputs. 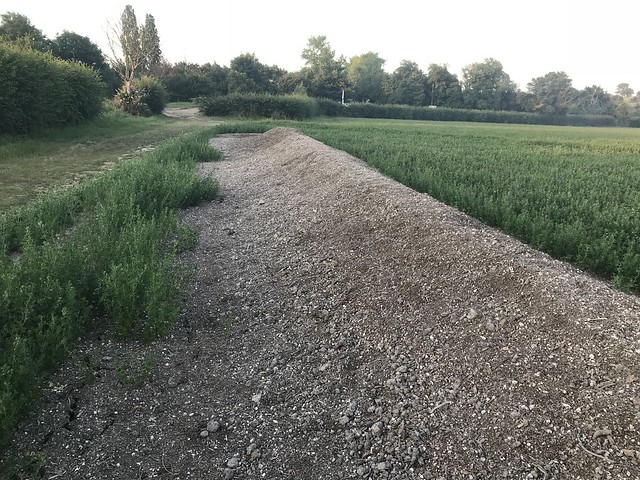 These were all things that were discussed during the walk. The first stop was the compost heap.

In the last 5 years, Simon has refined his compost making technique to produce a highly effective biological inoculant that makes a visible difference when it is applied. The compost includes horse manure, woodchip and garden waste, as well as gypsum (providing calcium and sulphur in a biological form) to counteract his high Magnesium levels, and is made to a strict method.  The materials are layered up in rows and then turned using a compost turner, every day to begin with and then less and monitored by using a temperature probe to keep the material below 70 degrees C, to protect the beneficial microbes. Once the compost has stopped heating up and is left, the fungi can start to grow, colonise the woody material and build associations. It is then left to mature, and then applied at between 2-4 tonnes per acre on the surface of fields that need it. Simon explains,

“Compost is the best thing ever. If the soil is not in the right condition, when you apply biology it will not thrive. However if the biology make their home in the compost, when the compost is applied to the soil, they won’t die off, they have a stable home and can thrive. It is changing my soils.”

It is applied to the fields that need it and is spread pre drilling by a contractor. In terms of the application rate, it is surface applied at around 4 tonnes per acre. Simon explains,

“It’s not being used as a fertiliser source or for organic matter, it’s purely an inoculation for the soil biology and a home to grow biology that will benefit the soil. Within a few weeks you can see the difference where it has been applied. “

This year Simon is aiming to apply a lower rate of compost across a wider acreage to maximise the benefits.

After the compost heap the group continued looking at some of the different crops growing and discussing rotations.

His long term vision is to get the soils into a position where they can generate all the nitrogen the crops need (he hasn’t applied P or K for the last 20 years), and get it so biologically active that the weeds won’t grow and the crops dominate. His aim is to lessen the impact of management on the soil and allow it to ‘bounce back’. He explains, “In a completely natural environment, all is balanced and correct. Everything that we do, changes it. If you gently ploughed it as the only intervention, the soil would recover. However everything that we do knocks it back, ploughing, cultivation, fungicides, etc.

We need to lessen the impact of all these things. “

One of the ways that Simon has managed to lessen his impact is to change to more spring cropping, which has dramatically cut his Nitrogen usage. He is keen to push this further and see how far he can go and what can be achieved. To this end he has a range of trials on the farm, including looking at how wheat performs without artificial Nitrogen, and whether the mycorrhizae will work with the bacteria and fix nitrogen out of the air and fed the crop.  Simon explains – “In a normal situation, the wheat would just go all yellow and be hopeless without Nitrogen, but its looked quite decent all year. It didn’t tiller out and there are less ears there definitely but it’s quite a reasonable crop.”

As well as the Nitrogen trials, Simon is also testing a range of wheat varieties to see if they behave differently in a no-till system. Simon drills all his wheat with a mixture of 4 feed wheat varieties which he has mixed together and saved the seed for the last few years.  This trial is a good opportunity to compare his mix with all the new modern varieties to assess whether it has comparable yield and performance. Trials were first completed last season and the farm blend came out as the highest yielding, as such the trial is being repeated to see if the same result can be achieved. As well as assessing the varieties, the inputs are also being modified – the first tramline is the traditional agronomist recommendations, 4 fungicide sprays, 2 plant growth regulators and a lot of nutrients including trace elements, it costs a fortune. The next tramline hasn’t had anything on it at all, no fungicides, no PGR, nothing. The third tramline is what Simon normally ends up doing on the rest of the farm, 2 fungicides and no growth regulators, and the final one has any biological products that he has to see what happens.

So what were the results?

As this is the second year of doing the trials, Simon explained what had happened last year. “There really wasn’t any visual difference between no fungicides and all this and the same last year as well. The one with no fungicides did yield less than the one which had all the inputs, but the differences in money wasn’t enough to cover the cost but we’ve had dry years without much disease so it could be different in a different year.

As far as I’m concerned if the soils healthy and everything is working well, your plants are going to be much more resilient to disease.

This will work well here but might not work so well somewhere else.”

The four varieties in Simon’s blend were chosen for disease resistance, (Conqueror, Gator, Diego, and Panorama). After three years of using his own blend, Simon sent a sample off to have it tested for varieties and out of 56 grains there were 8 that were Diego, the rest they didn’t know what they were. It’s all interbred and mixed up now.

There is a visual difference within Simon’s fields between the crop nearer the hedge and the middle of the field. The line is currently about 20 m out of the hedge with visibly higher plant succession and a greener and thicker crop from the impact of the hedge and the better biology. “Crops are always better near the hedge. I’m thinking about agroforestry.

My aim is to get the biology and fungal network to transfer all those benefits throughout the fields, although it’s going to be a slow process.”

Simon uses two drills on the farm, a SimTech tine drill and a Moore Disc drill. He explains, “I couldn’t be without either one of them. The tine drill will always go and will go when I shouldn’t go drilling. The disc drill needs more and more wet and will drill into the stripper header. Crucially it’s about knowing the soil conditions – you can’t teach that sort of thing, you have to learn it for yourself on your land.”

“I’ve done loads of soil testing. I’m building soil organic matter. I’ve not applied any Lime for 20 years whereas before I was applying every year. My pH now sits at around pH7, and I let the biology do the rest, I am creating the right conditions for the microorganisms to thrive.

“I’m looking under a microscope at home, and looking at mycorrhizal assessments is what I do now, to see what is happening with the biology and root associations.”

Simon echoed again the main reason for trialling new ideas, improving soil health. He explains, “Soil health is so important, and is the overriding factor in all decisions made, much more than financial implications. I am farming for the long term rather than one year at a time. It’s so difficult to get the crops to grow, the less I do to my soil the better.

The driving factor is to do a better job and improve my soil, saving money is just a help.”

“A mixture of different crops – think of the possibilities if you could grow 2 or 3 together!”

Simon finished the evening with his best piece of advice for anyone considering changing their management.

“You’ve got to make the decision yourself, its got to come from you, wanting to understand the soil and how it works in terms of its biology. I won’t claim that you can maintain artificially high yields, it’s a different way of looking at things, but I’ve massively lowered my cost base. Biological systems are not predictable.”

A massive thank you to Simon for a fantastic and enlightening walk.