Crops need nutrients to grow. Any nutrients required by plants are obtained from organic (e.g. manures, residues or soil organic matter) or mineral fertiliser. Recently, it has been estimated that without mineral nitrogen fertilizers 50% of the world’s population would not be fed, resulting in mass starvation and global crisis.

Manufacturing plants that have significantly reduced the N2O ‘leakage’ will be producing ammonia nitrate fertilizers that have half the potential to heat the earth’s atmosphere (or ‘Global Warming Potential’, GWP) of a plant that has no such technology installed. The process of manufacturing urea also results in approximately half the GWP of a tonne of urea compared to a tonne of ammonium nitrate from an ‘average’ ammonium nitrate producing plant.

Determining the GWP of the fertilizer that is used on your farm will therefore make a significant difference to the crop’s carbon footprint.

The Process of Manufacturing Fertiliser 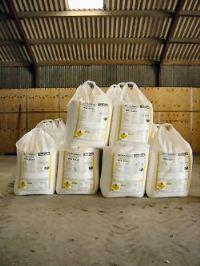 Nitrogen fertiliser is produced using the Haber Bosch process. This involves combining Hydrogen (from steam reforming) with Nitrogen (from the air) to create ammonia. The process is very energy intensive, needing high pressure and high temperature to be most effective, and this comes with a large carbon footprint attached to it.

Work by the International Fertiliser Industry Association (IFA) showed that fertiliser manufacture accounts for approximately 1% of global greenhouse gas emissions. If associated Nitrous Oxide emissions from applying the fertiliser are taken into account as well, the total increases to 2.5% of the global total.

There are long term solutions that are in development to reduce the emissions associated with fertiliser production. These include carbon capture and storage, renewable electrolysis (to produce the hydrogen rather than the very energy intensive steam process), or the use of biomass gasification. Biomass gasification uses a biomass based feedstock to produce a gas mix which is high in Hydrogen, which can be used to create the ammonia needed. This ammonia is then combined with nitric acid to produce Nitrogen fertiliser (ammonium nitrate). Studies looking at biomass gasification have found that the GWP can be reduced by 52% through using this production method.

China’s participation is essential in global efforts in reducing nitrogen related GHG emissions because China is the largest producer and consumer of fertiliser N, accounting for about 30% of global manufacture.

A project developed by Rothamsted Research and China Agricultural University (alongside other colleagues in the UK and China) have been researching different options for reducing the environmental impacts of fertiliser use. They found during the course of the project that a combination of technical innovations in manufacturing, and changes in how the fertiliser is applied could help to reduce the GHG emissions by between 2-6% of China’s overall greenhouse gas emissions. This is a significant reduction.

Innovation in the UK

For more information on the work done by Yara click here to visit their Fertiliser Industry Handbook (January 2017). Other fertiliser manufacturers have also worked to reduce the emission contributions from fertiliser production. The British producer, CF Fertilisers have implemented abatement technology to reduce Nitrous Oxide emissions by 3000 tonnes, reducing the carbon footprint of Nitram Fertiliser by 40% since 2010.

What can we Do?

In terms of practical measures that we can do at home, the only real option for anyone seriously interested in the emissions from fertiliser production is to ask questions and buy from producers who are minimising emissions. Moving forward more innovations will lead to a more streamlined process and fertiliser manufacturers will become streamlined in their environmental credentials.

The best way to minimise losses from fertiliser on the farm is to make sure that they are applied in the most efficient way possible, including fully accounting for field conditions and crop uptake demand. This will mean that the proportion of the emissions that arises from application is reduced, and also that more of the Nitrogen is used to grow profitable crops rather than lost into the environment.

Find out more about emissions from fertiliser application

We use cookies to ensure that we give you the best experience on our website. You may accept or refuse our use of cookies, or learn more at the link provided.AcceptRefusePrivacy policy
You can revoke your consent any time using the Revoke consent button.Revoke consent