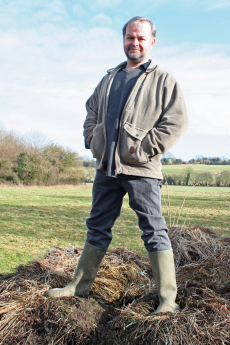 Andrew farms a 400 acre family arable farm in Hampshire which has a long history of conservation management and is in a HLS scheme.  His farm is a net exporter of electricity as a result of a small ground mounted PV system installed in 2011.

Andrew also co-founded the Environment Centre in Southampton in 1992 and was its chair for 18 years.  The Centre was not involved in agriculture but had an emphasis on domestic energy efficiency and environmental management for SMEs.  More recently Andrew has been involved in renewable energy on farms, researching anaerobic digestion on behalf of the South East regional government in 2010, as a director of a solar power company, and most recently working with Forum for the Future on their Farms as Power Station project.

Andrew has been advocating the need for action on climate change since writing about it for a local newspaper in 1990.  In particular he has viewed ecological footprinting as an exceptionally good way of communicating carbon impact.  The carbon calculator enables farmers to do “what if scenarios” on their own farms to better understand the effectiveness of the practical mitigation measures they themselves can undertake.